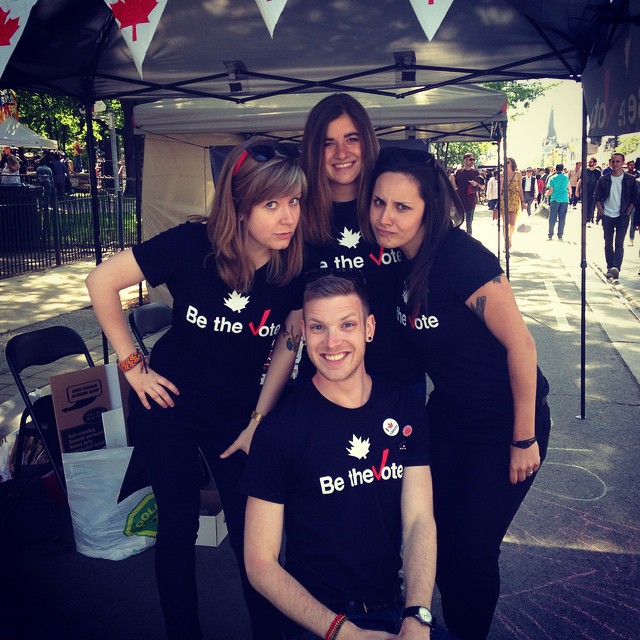 Last Saturday, June 6, our street team headed out to Dundas West Fest in Toronto for a day of outreach. Our goal of the day was to engage young attendees in our cause and heighten awareness of Be the Vote, as well as hand out flyers reminding people that we have a federal election coming up this year.

The flyers had pictures of some of our volunteers, accompanied by quotes about why each of them votes. "That way", we thought, "we can appeal to several attitudes surrounding why people vote". We included the, "I vote because I matter (the most in the world)" quote. Then there's, "I love our country and I have a maple leaf tattooed on my ass" quote. And finally, the more solemn, "I see problems in our society and we need to get more engaged and pay attention to what is going on" quote.

There were two shocking occurrences that stemmed from handing out the flyer. For one, we chatted with a dude who said he would absolutely vote. In fact, he said he would vote that evening! While we were thrilled by the quick sell, we were a bit shocked that he thought the federal election was that day.

Confusion didn't end there, however; the same dude was deliberating over the flyer with his friends, trying to decide which candidate he would vote for. For that, we are sorry Toronto; there may be 500 people who are utterly disappointed at election time when they realize that our volunteer team is not running for office in their neighbourhood.

We also learned that handing out flyers is somewhat akin to trying to hand people bombs; 80% of people are actually scared of unidentifiable, black-and-white printed paper. You would think that riot cops have something to learn from that - "Stay away, we have flyers!", and do away with the tear gas.

Finally, we learned that people really love the Canadian flag. We had purchased some funky headbands from Dollarama that had Canadians flags as ear-type apparatuses on them. We thought we would wear them to, you know, look more approachable and fun-loving (we struggle with that). Wearing them didn't last long though - that is all that people (children) wanted from us.  As such, our outreach plan from here on out is solidified: weird Canada Day headbands.

Thanks to our volunteer crew and everyone who stopped by to ask what's up!

or
Please check your e-mail for a link to activate your account.